"I am proud to be involved in an organization like the Children’s Foundation that makes a difference in young people’s lives.”

Jeanne Forsythe has played a significant part in the phenomenal growth of The Children’s Foundation. In 1976, while she was an employee for Family & Children’s Services, she was involved in the establishment of the Stephen Promoli Memorial Fund. The Fund was started by the Family & Children’s Services Board of Directors to honour the memory of Stephen Promoli who tragically lost his life while on a canoeing trip.  The purpose of the Fund was to provide life enrichment opportunities, like summer camp and sports and arts activities to disadvantaged children in Guelph and Wellington County.
Jeanne has great memories of the early years and being involved with fundraising that included many nights in bingo halls and forming an early partnership with the Guelph Wish Fund for Children event held in March of each year. She also played an important part in engaging both of the school boards into referring disadvantaged children for funding of school and community enrichment programs. 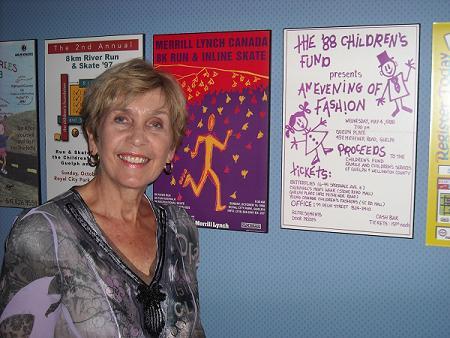 In 1991, Jeanne played a role in the transition of the Stephen Promoli Memorial Fund to become part of the newly formed Children’s Foundation of Guelph and Wellington. She continued with similar roles in fundraising and granting funds for children in need. She was actively involved in the establishment in 2001 of the Promoli Family Fund in memory of Fred Promoli, former Executive Director of Family & Children’s Services.  The purpose of this fund was to establish a scholarship program for youth in the care of Family & Children’s Services. Once she retired from Family and Children’s Services in 2005, she took on a new role with The Children’s Foundation as a member of the Marketing Committee on which she still sits. She is very excited about her role in celebrating the history of the organization while making progress for the future. She was very pleased with the Guelph Mercury feature that was distributed in June, 2008 in that it was a great way to tie all of the programs and work that The Children’s Foundation does together.

A smile comes to her face when she recalls receiving letters from kids that went to camp and how great of an experience it was for them during that summer. However, the greatest reward comes on the occasions when she is approached in public by adults who recognize her, thank her, and let her know that an important part of their childhood was the funding that they received for camp or other activities. To see how these children have grown into fine adults is what makes all of her work worthwhile.