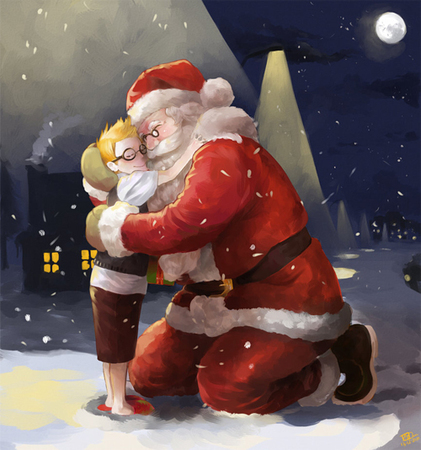 Stepping outside into that cool, crisp air, we all know it’s coming. Soon enough, if not already, we’ll be thinking about making a list of whom we need to shop for this year.

Week by week, we’ll be getting closer to that moment. The moment we get to see the smiles on the faces of our loved ones when they wake up on Christmas morning and see a present under the tree with their name on it.

That is the exact moment a single mother from Fergus remembers so clearly from Christmas last year. She has asked for her identity to be kept anonymous, so for the sake of the story, let’s call her Suzy, and her son Michael.

Suzy has lived in Fergus with her 15-year-old son Michael for two years now; both years they have received help from the Children’s Foundation’s Adopt-A-Family Program. Talking with Suzy about her experience with Adopt-A-Family was humbling.

When Suzy found out that she was going to receive help from the Children’s Foundation at Christmas time, it was a relief. Suzy and Michael do not have other family. They have had a rough time – they’ve been victims of abuse. Suzy told me that the Children’s Foundation’s Adopt-A-Family Program made them feel like "there are people out there who really care.”

As a mother, Suzy’s favourite moment is when she sees Michael’s face light up when he sees a present for him under the tree. Michael is 15, and he is trying to fit in. Suzy told me that it is difficult for him because if you don’t have what everyone else does as a teenager it makes life harder. Suzy told me that they are thrift store shoppers, because if they need new shoes, or a new shirt, it’s all they can afford.

Receiving gifts from Adopt-A-Family at Christmas time makes Suzy and Michael feel special, and like they are cared for. When asked if Suzy talks to Michael about where these gifts come from, she said, "Michael and I discuss where we are in life. We try to give back. We get yarn and we crochet hats for newborns in the hospital […] we are getting – but we also need to give what we can.”

The Children’s Foundation and Adopt-A-Family has made it so "Christmas isn’t quite so stressful,” said Suzy. The program has allowed Suzy to keep her food budget intact over the holiday season. Suzy said, "when someone reaches out, it makes all the difference – it makes it a little easier and a bit more enjoyable.”

Watching Michael unwrap a present of a new shirt someone bought for him was another favourite moment. She told me it makes him feel like "someone thought about him,” and that he "isn’t alone,” even though sometimes they feel like they are. Suzy told me that the most special part about this process is the thought and effort that the donors put in to help families, and she wants them to know how much their efforts mean.

Each year, Suzy sits down to write thank you letters to the people who have donated to help her family feel loved. She said that knowing that someone cares about her and her son makes her feel special. One year, Suzy received a quilt for herself, she told me that it made her feel comfortable, warm, and loved.

This is really what it’s all about. It’s a season to give and share love. Everyone deserves to smile and feel loved at Christmas. By participating in Adopt-A-Family, we have the ability to spread happiness, and change the lives of many.

At the end of my conversation with Suzy, she thanked me. She thanked me for speaking with her and told me that I was helping to give her a voice. Speaking with Suzy was a privilege. Her strength is an inspiration, and her words are full of meaning.