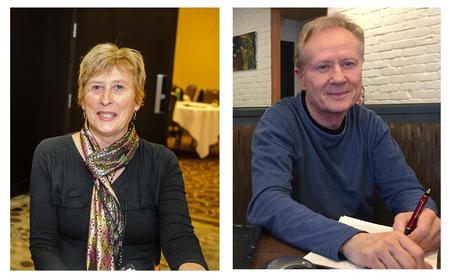 At first glance, Children’s Foundation volunteers would be seen giving their time at our events, at various schools helping to serve meals, in our office doing day-to-day tasks, or speaking on our behalf in the community. What you might not see are the volunteers who also work behind the scenes giving hours of their time for program development and planning. These volunteers have contirbutions that are often never seen and often don’t receive the recognition they deserve. We would like to take this opportunity to shine a light on two of those special volunteers.

Ron Cowley is first and foremost a father, but he is also a retired school teacher, and an active volunteer in our community who selflessly gives of his time. Ron’s background in teaching has given him a skill set that has been invaluable to the development of our volunteer program. As most small non-profits know, having a full-time volunteer coordinator is often not an option when trying to maintain a tight budget. This at times can leave a gap in the formal development of volunteer programs as time simply doesn’t allow for it.

“Volunteer management is a huge part of running a successful organization,” says Administrative and Outreach Coordinator Brenda Walsh. “It is just as important as soliciting donors for financial contributions”. Small organizations like the Children’s Foundation rely on the support of volunteers to make their mission a reality. Ron has made it possible for the Children’s Foundation to really focus on the foundation of our volunteer program including developing tools that will help enhance the quality of the program.  Ron has made it possible for Brenda's “someday plans” to become a reality.

Ron’s work at the Children’s Foundation began with the development of our volunteer manual, and he has also helped with writing volunteer positions, policies and procedures. But his work doesn't end there. Ron attends each of our events with his ”volunteer management hat” on. He collects information and watches processes to see what can be done in a faster, easier, or more efficient way in the future. He attends debrief meetings where his findings begin the process towards possible solutions. Ron feels that it is imperative that feedback from volunteers be recognized and addressed in the most appropriate way, leading to improvement and better processes in the end. He is, in many ways, the voice of our volunteers.

Ron is very quick to talk about the ways he benefits from his volunteer involvement. One of Ron’s personal goals is putting his skills to use. He is driven by making improvements or finding ways to “fix things”.  Ron feels that he benefits from the relationships he has developed with the staff and volunteers at the Foundation, and he says it is the people that he works with that make it fulfilling for him. His volunteer role at the Children’s Foundation is helping him reach some of his personal goals while supporting a worthwhile organization.

“If I can make it easier and more enjoyable and fulfilling for the volunteers, through listening, evaluating and making improvements, then I'm happy."

The Children’s Foundation needs volunteers like Ron who recognize the importance of volunteerism. What better way to recognize Ron’s work on our volunteer program than during National Volunteer Week!

Thank you Ron for brightening the futures of so many children, one volunteer at a time!

Jessie Watt is recently retired and has turned her skills and attention to volunteering, as she was looking to find meaningful ways to get out into the community and meet people. She is an adventurous, outgoing person who loves people. She gets excited when she embarks on new challenges and projects, and she isn’t afraid to build her world in a way that she feels it looks most beautiful.

Jessie first came to the Children’s Foundation three years ago, and she was unsure of what her volunteerism would look like when she first applied. Jessie has sampled many different roles in her years with the Foundation including volunteering at the Around the World Gala, Fore our Kids Golf Tournament, and Live Free breakfast. Jessie has also joined a Food & Friends team serving nutritious meals to kids in a local school, and has volunteered as an office assistant doing various administrative tasks.

It seems most appropriate as we celebrate National Volunteer Week to recognize Jessie’s contribution, as her volunteerism recently has been in a supporting role for our volunteer program.  Currently, one of Jessie’s roles includes collecting the stories of our volunteers. Jessie has been working hard to ensure that all of the volunteers who support the Children’s Foundation receive heartfelt recognition. Jessie has even received her PREB training, which is a program that focuses on the recognition of volunteers, as she feels that everyone needs to feel valued and appreciated.

Jessie truly feels like she has become part of the Children’s Foundation family through her work over the past few years. She loves the variety of roles available, and the flexibility within those roles. In addition to keeping her skills up-to–date, Jessie loves learning new skills through her volunteering. She feels there is a risk when people retire that they can get lost in the cracks and she didn’t want to see that happen. “Volunteerism gives a special meaning to life.”

The Children’s Foundation is only one of the organizations fortunate enough to have Jessie’s support, as she also spends her time volunteering for the Guelph Humane Society providing foster homes to cats that have been surrendered, as well as with an organization that supports individuals doing court appointed probation.

Jessie is drawn to the Children’s Foundation because she believes all children should receive the opportunity to develop to their full potential. She did however laugh a little as she explained why her volunteerism is selfish in some ways. She has a list of very specific, important things that she is looking to gain out of her volunteer experience, and when other people benefit from her volunteering, well that just seems like the icing on the cake. Jessie already feels she has gained skills in the Human Resource field, and has improved her own self-confidence. Simply stated, Jessie says “each person is responsible for their own development, positivity and happiness”.

Thank you Jessie, for all of your support!