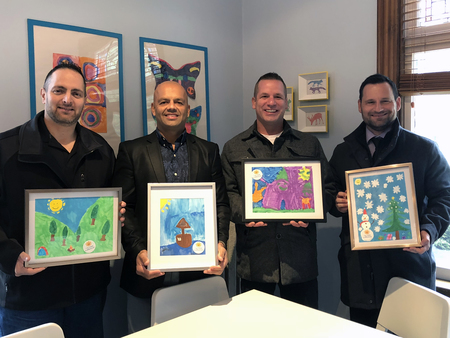 A group of four childhood friends are using their talent for throwing epic parties to do some good in the community.  Mike, Steve, Matt and Jim make up the quartet behind MJS Entertainment.

“We chose the Children’s Foundation because we all knew someone who had been impacted by their programs or who had been involved with them in some way”, says Jim.

“We always knew how to have a good time and we wanted to turn that into a way to raise money for a great cause,” says Matt.

These fellas are four of the highest energy guys you’ll ever meet and after many years of friendship, job changes and new babies, the guys wanted to give back to their community.

“We talked about it over beers many times, but the timing wasn’t right”, says Jim.

They decided to test the waters to see if it was possible. Matt reached out to an old colleague from his DJ-ing days at Club Denim who told him if they got 150 to 200 guests, it would be a successful event. The foursome took this as a challenge; their first ever MJS event brought out 800 guests and raised $7,500 for the Children’s Foundation.

The group recently held their second event in October, an epic Halloween party called Thriller Night, at the Guelph Concert Theatre.  The event raised $5,000 for the Children’s Foundation.

“It was great to see how engaged the community was – as soon as we said the Children’s Foundation, people wanted to get involved,” says Mike.

MJS is a labour of love for the guys. They’re passionate about giving back and their work is making a real impact on the community.  When asked how these events have affected each of them personally, they had this to say:

Jim: “It’s been so rewarding. Knowing people who have been helped by the Children’s Foundation has had a huge impact on me.   Not to mention getting to work with my best friends.”

Mike: “Seeing how the community got behind us and wanted to be involved and help was really eye opening.”

Matt: “Doing this work has helped my connect more with my own kids. It’s so rewarding.”

Steve: “Hearing the positive impact that the Foundation’s programs have – thinking that there are kids in our community who don’t eat breakfast before school and they are helping to solve that – that really hit home for me.”

Their work has already helped many kids in this community, and they’re not done yet. We are truly grateful to these generous, passionate, and fun-loving, hometown heroes!