Flying Higher than Ever Before. 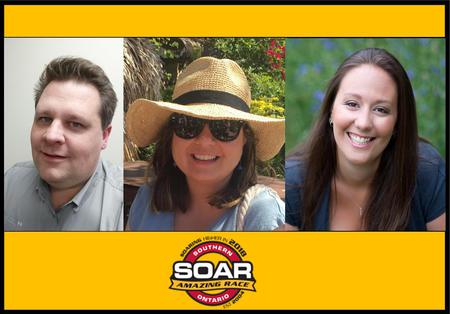 The only way to know how far you will go in life is to spread your wings and SOAR!

The Southern Ontario Amazing Race (SOAR) is Ontario’s Longest Running Adventure Race fundraiser. It is a 3rd party fundraising event to support the Children’s Foundation of Guelph and Wellington. The event raises between $70,000 - $80,000 a year, and in 2018 a milestone was reached when the 20 teams of two raised $72,829, bringing SOAR’s 15-year total funds raised to $1,009,848.

Without events like SOAR, the Foundation would not be able to continue to offer its programs and services to the community. The race Directors are a key part of the volunteer team that is responsible for organizing this hugely successful and popular event. We recently caught up with a few of these dynamic volunteers and they shared some thoughts about what the race means to them.

Scott Hammond is in his fifth year as a volunteer with SOAR. He first became involved with the Children's Foundation of Guelph and Wellington through meeting Glenna Banda and his volunteer work with his Kiwanis Club of Guelph. He was ready for a new volunteer opportunity and signed up to help with SOAR. In his first year he played the role of videographer and photographer. Scott was hooked and joined the team of race Directors the following year. His main role now involves using his marketing skills to help create marketing collateral as and publishing race content.

Scott feels that one of his greatest contributions to SOAR is helping to reach out and recruit new potential racers and volunteers, as well as race Directors. “We are always looking for new race Directors,” he says, “and being a Director is a great way to volunteer and support The Children's Foundation.”

Laura Cassin is another volunteer who seems to have caught the SOAR bug. Laura started volunteering with SOAR in 2004 and became a Director in 2008. For the past several years she has filled the role of Volunteer Coordinator and has helped with the logistics of planning the race with all of its challenges. When asked about her volunteer involvement with SOAR, Laura shared the following: "It all starts several months before the race, when we meet weekly to plan challenges and arrange things like lunch and overnight locations. I then start recruiting volunteers and work with my co-coordinator.”

Laura’s co-coordinator, Emily Boms, joined the SOAR team 15 years ago when she was living in Ontario. She has since moved to California but thanks to the miracle of technology she has been able to remain in her role, despite the fact that she is so far away. Together Laura and Emily assign various volunteer roles and communicate with volunteers to confirm availability. “Just before the race we hold a volunteer orientation," Laura notes, "then during the race, I circulate around to challenges ensuring that our volunteers have everything they need. We have a fantastic volunteer group, many of whom come back year after year. I work hard to make sure their experience is enjoyable as they keep the race moving along."

Laura loves the race and everything it encompasses. "There are times when life can feel overwhelming: going to work, looking after a family, renovating a house, spending time with friends and family. Adding the Race on top of that makes for a busy life and yet those of us who do it come back year after year, because there is something really special about it. It is a combination of great people, fun and challenging work, and a really worthy cause. By the end of Race weekend we are all exhausted but riding a high at what we've accomplished. It's pretty magical."

April Plecke became a volunteer Race Director last year, but has been volunteering with the event for many years. She first got involved with SOAR as a volunteer, and then she and her sister decided to take on the race as a racing duo! April is one of the many volunteers who have had a huge impact on the success of the event. She has worked as a Director over the past year diligently researching, planning and organizing every intricate detail that goes into this complex event. She acknowledges that, “It’s a huge time commitment and a lot of work, but I love all of the amazing people I get to meet, the friendships we make and how much fun we have planning the race.” This is where April's dedication to the race comes from and the cause behind it really pushes her to SOAR. April estimates that she puts in about 30+ hours a month, and even more as the race date approaches. She is no stranger to fundraising for charities. Prior to joining the SOAR volunteer team she worked as a fundraiser for the MS society, which is another charity that is very close to her heart.

On behalf of the Children’s Foundation of Guelph and Wellington and the children we serve, we would like to send many thanks out to Scott, Laura, Emily, April and all the Race Directors for their boundless commitment to the Southern Ontario Amazing Race. This race simply would not be possible without you!