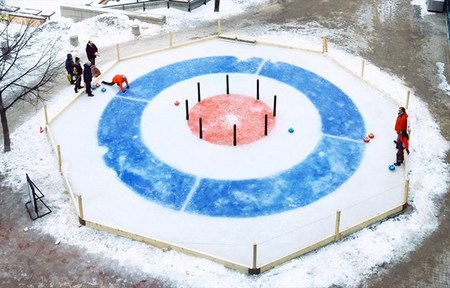 Key thing for you to do: register for the Tournaspiel!

Sometimes children dream big dreams, nations rise to new challenges, and humankind takes a bold next step. And then there are times when neighbourhood rink hosers get a tad ambitious. That time is now.

The Sunny Acres community is inviting Guelph to come, hang out and try something pretty cray cray as the kids once said. Last year, some fun, smart people in Winnipeg invented a game called crokicurl—a combination of crokinole and curling. It’s one part absurd, one part hilarious and two parts sensational with a dollop of we’re not entirely sure what we’re doing.

And it’s coming this weekend, February 17 to 19, to Sunny Acres, which is quite likely Guelph’s oldest community rink (we can’t prove that, though we a picture from the 1940s—the period better known as yore).

Enough of the lengthy preamble. What are we doing? We’re not quite sure, but it’s going to super fun.

Schedule: subject to all kinds of changes based on weather, audibles, whim and whimsy

Saturday: come out and try, how hurry hard could it be?

100% of Tournaspiel registration fees will be in support of the Children’s Foundation of Guelph and Wellington’s Free to Play program. All jokes aside, we pegged this as a sweeping good program that really rocks.

Crokicurl in Guelph is entirely possible because of making friends with some pretty good types:

Some more stuff and things to know